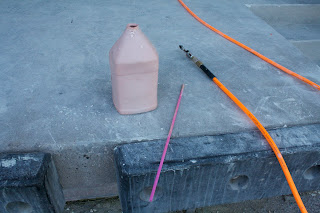 I started trying out methods to make the "blood splatter" on the bats, and from previous splatter paintings I knew that this technique would work. I basically suck glaze or paint, 3/4 to half way, up the oversized straw. I then hold the clean end of the straw up to the air hose nozzle. Aiming at the target you pull the trigger a...n...d...SPLAT! You have splatter. 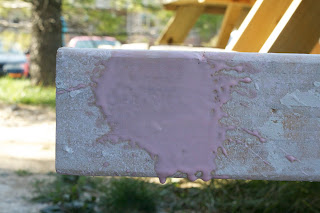 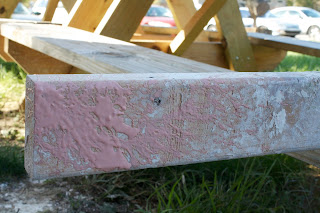 I tried a few different glazes on some pieces of wood and found that the thicker one worked and looked better. So, I tried it on a bat. 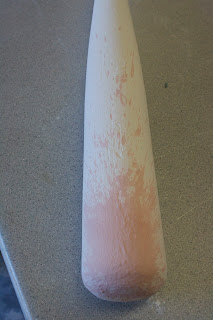 My original plan was to use splattered clear glaze on the bat, fire them to cone 06 so that they wouldn't shrink down any more, then to trace all of the clear splatter with gold luster. After thinking about it for a little while I realized that it would be quite a challenge to get the gold luster on there perfectly, and once it was finished the white areas might come across unfinished because they would still have a bisque appearance.
So I tried a few different things in the studio to see what type of effect they would have on the white bisque. I tried different oils, wax, and lacquer and nothing really looked good. Finally I went to Home Depot to look around and I found a clear spray matte varnish. The varnish gives it a little bit of a sheen, which takes away from the dry bisque look.
I also found a few different types of gold paint to try instead of the gold luster. 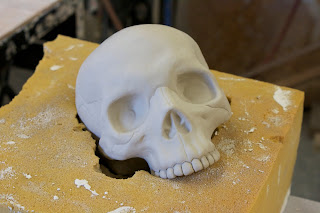 This week I made an extra "just in case" skull, and will continue to make a few more next week.
Posted by Ashley at 7:19 PM